To be a teenage beatnik folkie was a difficult ambition in Brisbane, Queensland, Australia, in nineteen sixty-five, with the police opposed to youth staying out late, (risking arrest for vagrancy after 11pm) plus, almost-tropical weather’s not conducive to beat fashion – duffel coats and blanket coats, corduroy skirts, black stockings. Our outfits had an airing for about one week in August. Generally though, heat-defeated, we had to aim for being hip rather than looking like we were.

I lived in a Swedish prefabricated house on Enoggera army base. My friendship with communists and other civilian peaceniks displeased my father, extremely. His battalion was training young soldiers, kids really, volunteers and conscripts, for the war against Vietnam.

I was opposed to the government call-up for troops to join the U.S. war against Vietnam and I was against war, entirely.

As it happened dad retired early from the army (the Vietnam war continued).
Perhaps it was also his attempt to retire from alcoholism. He went to work for the state roads department collecting soil samples and hiring gangs to build cattle-truck roads in outback Queensland. He bought a new house across town in a northern suburb called West Chermside.

So my final year at school took me through the city every morning and afternoon.
After school, I could stop for coffee at the Primitif cafe or browse the beats in the American Bookstore on Edward Street, although the French - Sartre, de Beauvoir and Camus (an Algerian) – were the ones on my mind, at the time.

Walking up from the last tram stop at Chermside was despairing for me, at seventeen. After a short strip of small, less-than-thriving shops the houses thinned to paddocks, a tannery and a chest hospital that would remind me of my mother’s past illness and her potential fragility, and the TB tests, X-rays and shots we’d had as kids (although never at that hospital). I felt like a character in the Sartre trilogy, except that I wanted an escape. (I guess I faked existentialism).

Some time that year,1965, my first published poem (outside the annual school magazine) appeared in Hemisphere magazine - sharing the page space with Bruce Beaver.

For a brief period mum and dad separated. Six months ? A year ?
My brother and sister had already left home.
I finished my time at high school desultorily.

A year later, in trouble. In my first flat in "Chale Apartments" on the river right near the Storey Bridge, opposite Evans-Deakin shipyards, away from home with two drag queens and a suicidal pill popper who wrote poems, spoke Greek and sang Buffy Sainte-Marie songs. Nothing lasted long - I called the ambulance after her suicide attempt and knew I should go home.

Not much later (although rushing this sequence omits some further adventures-in-a-small-city traumas) I was evicted from a Milton flat I shared with Petal, a Sri Lankan law student, for noisy music – most of my friends were singers and musicians.

And as for my "career" - I had already been ditched from student nursing for waking a ward in midnight humidity by swimming with friends after end-of-year exams in the pool of a motel next to the hospital where I lived and worked.

I got a job in the Thatcher Library at Queensland University. Even though the librarian, Joy Guyatt, was a wonderful socialist and political activist who encouraged me to study librarianship, eventually, around two years later, I came to the youthful conclusion that it was a tedious profession for a beatnik, and by then, also a published poet. So I ditched my brief pursuit of a career as a librarian.

I moved to a weatherboard house with a big verandah, at Fig Tree Pocket near the sluggish river, with Evan, my med-student boyfriend, and a friend, a Scot called Norman, architectural draughtsman, big drinker, raconteur and poetry recitationist.

We held a housewarming party - a strobe light suspended in the eucalypts, speakers perched out on the verandah, a night graced by Harry Zetlin’s portable party, kings of Brisbane cool. I tried hashish for the first time, a dark green lump dropped onto the edge of an electric stove plate, the smoke inhaled through a Bic biro tube – spotting hash.

I already knew how amphetamines dissolved and the particles floated, descending the pale yellow liquid of a flagon of sauternes.

Not so sexual, Evan and I, not hot at any rate, he could be jealous if I seemed to be sexy elsewhere.

Like once, Evan was at his summer holiday job driving a Mr Whippy ice cream van, I went canoeing with Norman and somehow we capsized the canoe, and nearly drowned laughing, ciggies floating out of our pockets bobbing all around us out in the middle of a shark-infested bay between Bribie Island and Redcliffe.
We dripped homewards, still laughing, happy survivors.

Perhaps that humid Queensland day had not been good for Mr Whippy. Evan was in no mood for tales of happy exploits, nor for his girlfriend-enjoying-herself-with-a-housemate. It seemed so Archie-&-Jughead … but … no … it was much worse and the apparently serious domestic ritual of “where's-my-dinner?” was hours off, not even considered. So - Evan opened the fridge, grabbed the lamb chops and hurled them across the kitchen in a mini-rage … what a disaster … etcetera …

A short while after that, I kissed a lesbian one night behind the café where actors and others (people like us) regularly played late-night charades - Evan was much more angry about that and we broke up not long after.

My cue to leave.

I declared I was going to Melbourne, where I was born (or near enough - I was born in a small base hospital at Seymour just up the highway a bit north of Melbourne.) I had decided I should live in a garrett and become a poet in Melbourne.
Instead , I caught the interstate bus to Sydney.

I carried a vinyl suitcase and two vinyl records – Bob Dylan’s Blonde on Blonde and Jimi Hendrix’s Are You Experienced. This Bob Dylan record was the double album where he first went electric with the musicians who were to become The Band. I had been to Bob Dylan’s cross-over concert in Brisbane and was blown away, lost in rock.

I’d obtained Blonde on Blonde by swapping a dulcimer with Mike O’Rourke, a public servant and folksinger-songwriter who stuttered markedly unless he was singing. Mike taught me to play guitar – the first song I learned was a Dylan song - Farewell Angelina.

Here I was with two LP records, a suitcase full of clothes, a copy of James Joyce’s Ulysses, the Faber Book of Twentieth Century Verse, a Moscow Foreign Languages Publishing House pocket-sized edition of Vladimir Mayakovsky:Selected Poetry in English, a beaten-up exercise book full of poems-in-progress and a job to go to at Prince Henry Hospital out on the bleak and weather-beaten cliffs alongside Long Bay Jail at Little Bay, Sydney.

Every few days pallets of loaves of sliced bread wrapped in plain pink greaseproof paper from the jail bakery were delivered to the kitchens for the hospital staff and patients. Prisoners in green uniforms maintained the hospital grounds.

A couple of months after arriving in Sydney I turned 21. Jude, a friend from Brisbane, gave me a birthday party at her Tintern Road terrace house and a bag of yellow dexedrine pills – 1969. G-roo-vy.

That was the year I became a vegetarian. I was chewing on a piece of overcooked steak in the hospital dining room when it was suddenly so clearly dead flesh – surprised, repulsed, I renounced meat eating.

1969 was a big year –I was “discovering” my sexuality as a bisexual with the wrong girl – a kind of prefect type. And then I met Nina.

Nina looked as though she’d stepped out of an Aubrey Beardsley drawing – all pale and angular - although she’d really stepped out of a family home at suburban Peakhurst. Nina lived in the nurses’ quarters too – we spent our off-duty hours together constructing a Dada Machine from found art objects like old telephones and wall clocks. 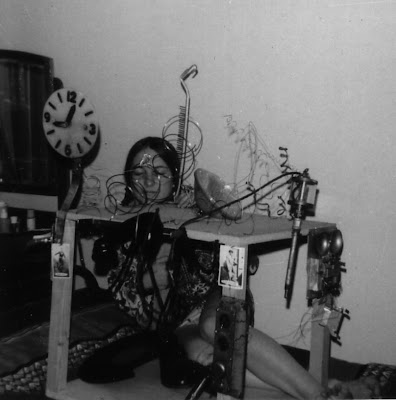 Nina and I fell in love. And we knew we were each destined for a-life-of-art.

We rented a two-room ground floor flat, with a bathroom up a flight of stairs that we shared with an argumentative Maltese couple in a large converted terrace house at 88 Gordon Street Paddington near the Oxford Street entrance to Centennial Park . On weekends I tried to be a hippie at Jumping Sunday – Johnny Allen’s big weekly Happening in Centennial Park.

Marijuana and speed were the dietary supplements of choice for most young people at that time. I tried mescalin with a long-haired blonde Yippie in a grey U.S. confederate army coat. At night he used to paint grey metal playgrounds with bright colours (this was a new idea then - now, coloured swings and slippery slides are the norm).

And, of course, zillions of other things occurred in between these paragraphs, as things might in optimistic times.

Nina and I bought little red Suzuki A70 motorbikes and, for the New Year holiday, on these fragile locusts of machines, we rode all the way from Sydney, down six hundred kilometres of the Hume Highway, to Melbourne to welcome 1970. 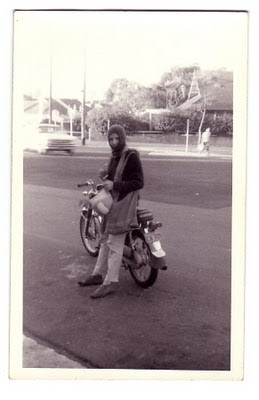