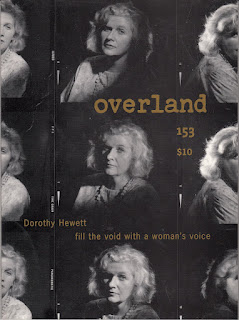 
Welcome, and thankyou for coming to Katoomba to celebrate the 153rd issue of overland magazine. I’m going to be very brief as I know you’re here to hear Dorothy Hewett. Merv Lilley and Kerry Leves will also be reading.

But first I’d like to say that this issue of overland has all the usual stimulating features - Dean Kiley’s selection of exciting short fiction; the opening monologue of Christos Tsiolkas’s contribution to the play Who’s afraid of the working class (in which a young boy has sexual fantasies about Jeff Kennett); an examination of Peter Coleman’s recent ludicrous old Courier-Mail conspiracy theories, and new theories about the lack of class-consciousness in fashionable eighties fiction. There’s terrific poetry by Dipti Saravanamuttu, Carolyn Gerrish, Linda-Marie Walker, Emma Lew and others. And great reviews, including Jenny Lee on Among the Barbarians, Carole Ferrier on the recent biography of Eleanor Dark (in whose house we are standing) and Kerry Leves’ uniquely percipient, condensed column scanning no less than fourteen recent books of Australian poetry. There are new socio-historical essays, national and international reports and, as Ian Syson points out in his editorial, in this issue we celebrate the work-in-progress that is Dorothy Hewett’s literary life.

Dorothy has been a friend to overland from the very early days and the magazine is pleased to be featuring her. On this occasion we are offering a 'Dorothy-Hewett-special' to new subscribers. If you subscribe today - it’s only $34 - in the future you’ll get an extra free issue...so you’ll get 5 issues - simply write “Dorothy Hewett” on the back of the subscription forms - they’re over on the book sale table.

In this issue, Nicole Moore from the University of Tasmania writes an extensive essay on Dorothy’s impact as a woman writer. Let me give you a sample of this explorative piece -

“Did I contain multitudes/or was I this lone woman/having herself on?” Hewett the poet asks, in ‘The Upside-Down Sonnets’. Stephen Sewell has called her Australia’s tempestuous heart, but with Anais Nin, Hewett often laments that “no-one has ever loved an adventurous woman”. Perhaps the women in her work can be seen as representative parts of Australian feminism’s ranging and complex self-consciousness, at odds with shifting forms of power and often most critical of itself. There’s no reason that a feminist self-consciousness may not be cast as Australia’s ‘tempestuous heart’. Perhaps, and yet that bad, beautiful girl, the vain bourgeois bitch, too self-obsessed, too vulnerable, romantic, caustic and confessional at once, sings and screams to haunt us, always wanting and usually wanting more than there is...” the essay continues with an amplification of this enquiry.

Then, in an interview called “Jill of all trades” Nicole Moore again talks with Dorothy candidly about her life .

We also have Lyn McCredden, the Victorian academic and poet, who has written a poem in homage to Dorothy. I’ll read the final section of the last stanza-

Lover and awkward woman,
poet, you are always gentle,
your garish chaotic yearning
may well fail to seduce
that final surly lover,
but I can hear you
in that wide place
giving it a good go
the silence
dancing with your words.
I wouldn’t give up hope.

There are two new poems and an excerpt from The Neap Tide - Dorothy’s latest work of fiction - from which I think she’ll be reading in a minute...there’s also a talk Dorothy gave for the Australian Society of Authors earlier this year called The Australian Writer Today where she makes a very exorbitant statement - “the good book gives me the same pleasure as good sex”. Well, my aim isn’t to lower the tone but sometimes I’m a literal kind of person ... and I have to wonder to what use exactly is the book put!

Dorothy (like Christos Tsiolkas) is a leftie who sexualises almost everything. Let me quote a bit from a poem from Dorothy’s Collected Poems describing incidents around a poetry reading in Tasmania. Here are Alice from Alice in Wormland and her invented poetic animus, the boy Nim -
Nim raged/ with a groupie/ Alice betrayed him/ with the last Tasmanian poet/ her nipples bitten/ her feet pricked/ by the bonsai wattle/ she thought about a threesome/ he said he’d rather watch/ with the wardrobe doors/ half-open/ Devils mated/ extinct tigers howled/ in Burnie’s sulphurous air/ the poet buggered her/ his wife in flannel dressing-gown/ waited for a kiss/ Nim’s wife dressed up/ in cowboy boots/ & stetson hat/ kissed Alice/ full on the mouth/ they were all/ as thick as thieves.
Well - as you know - all poetry festivals are as wild, if not wilder than that...!

In the Wormland that is Sydney, my first sighting of Dorothy Hewett was at a poetry event in the seventies. She appeared as Rapunzel, not in suburbia....but Rapunzel the Darlinghurst bohemian, her long fair hair flowing down onto her full-length electric-blue velvet dress. She had recently become notorious through having been sued for libel over a poem ! Yep - a poem !

Dorothy’s life and work is incredibly varied. She is a wife, a mother, she’s been a Red, a worker, an editor, a traveller, a dreamer - always, I’d say, a Romantic - poetically, politically and philosophically. In her writing, she is an unrelenting autobiographer and her actual autobiography Wild Card reveals all for those who want to know more. Dorothy’s Collected Poems is over 400 pages in length and spans fifty years of writing. Along with that poetic fecundity she has also written plays, novels and songs. One can only admire this amazing output with an exclamatory “Phew!” 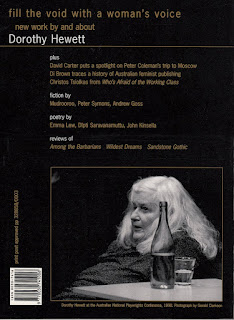