“Job share archivists” Susan M. Schultz & Pam Brown have augmented the Department of Dislocated Memory with a new installment of their collaboration "Amnesiac recoveries." It’s a project that raises all kinds of interesting questions.

I have never seen a history of poetic collaboration. A search in Google for all sites that use both “poetry” & “collaboration” yields 199,000 sites. A search for the exact phrase “history of poetic collaboration” yields none – or will until the Google crawler finds today’s blog. My sense – and it may be quite incomplete – is that poetic collaboration arises truly with the surrealists.* It enters the U.S. largely through the writing of the one group most heavily influenced by surrealism: the New York School. You will not find any collaborations in the Allen anthology. Indeed, the only ones you can actually spot** even in In the American Tree are in the section of critical statements, first a collaborative manifesto for the French journal Change& later the famous list of experiments that Bernadette Mayer & several groups of students at her Poetry Project workshops created. But if you look to Tom Clark’s anthology All Stars (Grossman Publishers/ Goliard – Santa Fe, 1972), a combination of NY School & beat writers that reflected Clark’s view from the Bolinas mesa, Ron Padgett’s selection consists of 17 collaborations – with Dick Gallup, Ted Berrigan, Tessie Mitchell, Michael Brownstein, Anne Waldman, Pat Padgett, Bill Berkson, Larry Fagin, Jimmy Schuyler & of course Tom Clark.

The absence of collaboration among Beats & Projectivists***, and for the most part from the San Francisco Renaissance+, is worth noting. It suggests, I think, a stance toward the author & literal authority that is substantially different from that of other communities of writing. Allen Ginsberg may well have been the Kral Majales or King of the May in 1965 Prague, but he also appears to have been a meticulous & careful warden of his own literary production. At the same time, Ginsberg took no credit for the editing job that literally transformed the pages on William Burroughs’ floor into Naked Lunch – a stance that parallels Ezra Pound’s similar editing of The Waste Land.

But the New York School had no such hang-ups with sharing credit. As with Surrealism, boundaries existed only to be transgressed, albeit with more of a smile & wink than the Europeans generally brought to the process. Boundaries are precisely what are at stake in “Amnesiac recoveries.” Here, for example, is “Shut-Lip”:

The investment banker sewed his lips shut. He'd arrived in a leaky ship, having paid dues to the dark haired man who answered to no name he could pronounce. Pronunciation is over-rated, he muttered to himself as he eased into the hold, arms bound in fetal position. His middle passage was punctuated (never leave metaphors of language behind, he added, pensively) by hunger pangs. No-name man told him nothing of the end, though his origin had been clear (he remembered, at least, his hard-earned MBA). He wanted to escape big words, like globalization, like fraud. Crusoe's accountant had nothing on his, member of the magic club in high school, artist of the extraordinary bottomless line. In the end, it was hard to collect his story, through teeth clenched like broken-jawed Ali's. One had to assume consonants, or were they vowels, emerging as from some Afghan cave into the abortive syntax of a bombing run. What we heard had something to do with sea, and ground, and sickness. The south sea island that welcomed him (sic) has only years left before the flood (lawsuits are pending). On its coral, the banker sits, quiet as monk, though not so tranquil. He knows his days are numbered, so he counts them in his throat. If he were a poet, one might say he'd found his voice.

There is a political tone here that one hardly ever sees even with Gen XXXVII of the NY School, and it’s stronger even in several of the other pieces, which generally circle around the topics of oil, corporate corruption & U.S. imperialism in the Middle East, always impacted by questions of memory – & of why memory fails to beget a seemingly appropriate political response. Of course, neither Brown nor Schultz can by any remote stretch of the imagination be characterized as part of the old St. Marks scene – Schultz is as far removed from there as one can be physically & still reside within the United States, Hawai’i, while Brown is a well-known Australian poet.

Indeed, one of the most interesting aspects of this as a collaboration is how it challenges “the political.” Typically & traditionally, one key to the political has been what might be thought of as “angle of positionality,” which usually gets reduced to an idea of stance. This is visible at the surface in identarian texts of all manner: the poet writes from his or her historical/ethnic/social/gendered position & articulation of that position is often what the resulting text is about. But Schultz & Brown come from different nations with different roles in the oil = global domination scenario. Schultz may be marginalized in her role as poet within the hegemon, but within it she most certainly & visibly is. Brown is at least doubly marginalized, living in a country that the U.S. has been known to treat as a branch office. There are of course further complications: Schultz is a haole, an Anglo outsider functioning in a role as authority by virtue of the teaching profession. The relationship of Hawai’i to the mainland is exceptionally problematic & a separatist movement continues to percolate there. Australia’s history vis-à-vis an imperial center & its aboriginal population is no less convoluted. Both of these writers are perpetually aware of these conditions.

Part of what makes “Amnesiac recoveries” so interesting is that it’s not possible to tell who in the collaboration is writing at any given moment, something that is so discernible, say, in a work like Sight that its authors, Lyn Hejinian & Leslie Scalapino, two fabulous poets who grew up in the same town in the same country within a couple of years of one another & whose fathers both taught at the same school, actually initial their individual passages.

But if we cannot tell who is speaking, or at least writing, in ”Amnesiac recoveries,” how does the reader then position these texts with regards to the issues of globalization that are raised? This is what strikes me as so remarkable: Schultz & Brown have arrived at what I can only call a transnational voice, a position that steps quite clearly outside of the role of states precisely as it address the problem of the rogue hegemon. If there is a position of world citizen from which one might be able to write, this is it.

Brown & Schultz do this with wit, sharpness & élan. The entire project – I have no idea if the two sections that are up are all of the collaboration or only just the first portion of it – is gutsy & fun while being serious in the face of some extraordinary challenges.++ In connecting the dots north-south across the equator between their two homes, these poets are erasing lines that we often forget are “always already” there. & it’s fascinating to see what now shows through.

* Some writers characterize the relationship between William Wordsworth & Samuel Taylor Coleridge, especially during the Lyrical Ballads period, as a collaboration. An argument can certainly be made for that, even though they didn’t publish poems as composed by both.
** I believe that the phrase that is used as the epigraph to the West section of the book, “Instead of ant wort I saw brat guts,” was itself composed during a collaboration.
*** Thus when Daphne Marlatt works collaboratively, as in the book Double Negative with Betsy Warland, it’s because she’s moved away from the Projectivism of her youth toward a political feminism.
+ The notable exception was The Carola Letters co-authored by Joanne Kyger & George Stanley. See Kevin Killian’s article on the row it caused in the SF scene. Killian raises the possibility that camp, the arch subgenre of gay culture, was a major thorn in the side of Robert Duncan. Camp as a discourse erases boundaries not unlike the ones that Schultz & Brown are tackling.
++ The web site captures this beautifully with a photograph of the two poets in Hawai’i staring at the apotheosis of the problem, a stretch limo in a setting in which no limousine should ever appear. 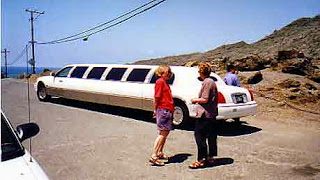 
Return to Reviews or the deletions or Pam Brown site