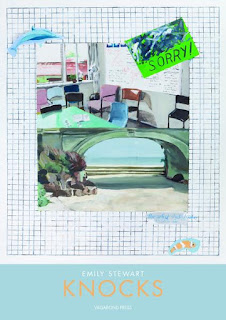 
I met Emily a year ago at a lounge room reading called 'cell' that Elena Gomez hosted. Emily gave me a copy of her chapbook LIKE published by Marty Hiatt's bulky news press in Melbourne. This is the scale I've loved all my poetry life - lounge room readings, chapbooks, generous book giftings and it's great that Emily's poems have been brought out via a quietish no-big-fanfare competition (in memory of Noel Rowe) at Vagabond Press - a genuinely independent small press. Meaning that Vagabond doesn't ask for money from institutions, government or private, to publish books. Much praise goes to Michael Brennan, Jane Gibian and Kay Orchison at Vagabond Press.

The cover art for Emily's book by Liang Luscombe quotes Linda Marrinon's famous early 1980s abject post-punk anti-aesthetic painting "SORRY!". In the thirty or so years since the initial artworld-shock-effect of that deliberately faux-naive picture everything has become super-corporatised and 'marketable' and these days the painting functions as an acceptable kind of cool apology offering comfort to no-longer-shockable gallery visitors. Emily's poems carry something of the initial disruptive intention of Linda Marrinon's statement as a kind of continuum of subversion.

Jumbled popular culture, immediate and anxious in its self-consciousness of certain decay, and highly-mediated imagery fills up 'our' internetted lives. Contemporary poems seem compelled to constitute various personal conditions and reactions as 'we' push to realise 'our' distinctive individuations in an often inattentive, impulsive, demanding and exhausting quest for 'newness'. Without inflating the term's retro connotations Michael Farrell says Australian poetry has a 'new wave' and that Emily's poems are part of it. He says 'the generation you didn't know you were disappointed in not arriving has arrived'. That's a very good middle-aged perspective on it. A long view might be that recent imagist ozpo is paying its dues to the old Anglo-American modernist guys with an added pinch of French symbolism, a dash of James Joyce & Gertrude Stein, a teaspoonful of the Beats, a squeeze of  the Johns - maybe Yau maybe Ashbery, a ladle of Gig Ryan (grand mistress of metaphysical metonymic artistry), all garnished with feminist influence like, say, the gurlesque. I'll explain - though many of you are probably already familiar with the term -

Over a decade ago, U.S. poet Arielle Greenberg developed an aesthetic theory that she called the "Gurlesque".  That's  'gurl' with a 'u' - a mild mimicry of burlesque. The term describes women poets raised during the feminist years of the 1960s, 70s and into the 80s, who now, although they're from different backgrounds, share a commonality in their writing. Poetry that combines "the serious and the frilly" and that has "a particular way of writing through and about gender". Greenberg says "In Gurlesque poems, the words luxuriate: they roll around in the sensual while avoiding the sharpness of overt messages, preferring the curve of sly mockery to theory or revelation. Gurlesque poems are thoroughly enmeshed in the visceral experiences of gender; these poems are non-linear but highly conversational, lush and campy, full of pop culture detritus, and ultimately very powerful".

Recent ozpo seems to be a considered continuum rather than a brash arrival which is why, apparently, we didn't know we were disappointed. Emily's poems are a definite and special component of an enlivened continuum.

I read recently that Paul Valéry said something like 'the purpose of poetry is to recreate the poetic spirit in the reader' - a kind of transaction occurs - poetry makes poets - and when that occurs the poems can be called 'generous' - for me Emily's poems have that effect. Or what, to make yet another quote, Chris Kraus says -  I am 'struck by the thrill of transmission'.

So - Knocks - about, back, on the door, on wood, school of hard ?  There is no title poem - it's up to you. And meaning can be as various as the poems.

I won't go through an interpretation of each of the poems (you'll be pleased to know) but I will single out the tonesetter - the first poem presents the familiar and exasperating dilemma of how to live in this world that we've all had a hand in so-entirely fucking-up. 'My Place in the Anthropocene' is set in the recent past, it's dated '2014', but like a flashback from the future it's a report and a lament that navigates the troubles or anxiety around a destiny of failure without seeking solution - 'The capital's new arboretum/made us see peril mortality-wise/so we sopped up legalese via/television  ...'   and 'Recapping further/we were told to 'thank Edward Snowden'/and embraced another Wiccan craze/while Siberia began to turn into 'Swiss/cheese' not because of magic but/climate change.'
Emily's poems are urgent but the tenor isn't. Most of them are packed with cryptic imagery so they come into focus gradually like Canberra does from the Federal Highway. They are 'a thinking thing' - meaning, and this is also about poetry in general, that a poem is something instrumental, a thing to think with and it's processual - meaning that it is part transference part temporality - made of moments, spots of time (from W. Wordsworth's 'The Prelude'), part of the scatty continuousness of living.

What is a poet's intuition  - an integrative intelligence, tracking, offroading, unfastening imagination. Does Emily track, pick, pinpoint, isolate? Yes she does and she also erases. The erasures are fun, plus, they 'make sense'. They're condensed renditions, discerning digests for smooth reception. Lydia Davis's stories get down to 'I sit/I will/I will/I found/I go/ I have' or 'he lives/his car/he's not/his apartment'  & VirginiaWoolf - 'the reflections one might have let glom. it was impossible .'... Susan Sontag's Where the Stress Falls is erased to the quick - 'Collect poems, produce superior poems/writing poetry is writing prose but it is the margin/Poetry kills in the province of the difficult' - well, that's saying something isn't it?

Emily mostly avoids aphorism but it's great when it does appear 'A good honeymoon/is when the vacay lasts longer than its transit.' ('Always the Bride')

There are a number of holidays/ short trips/flights in this set of mobile poems. In the skinny poem 'Red-Eye' - 'inflight enter-/tainment guide/say 'chillax'' 'chillax./we're/not going to the/moon./more hum/drum locale & vicious/civic primacies call/now next aisle over/son argues with/father/attendant inter-/venes, bends/& tone firm/confiscates/his gilded wings'. I like the way Emily lineates on enter & inter with hyphens like enter dash tainment, inter dash venes. She cuts into the quickening poem, draws your attention - what's coming next ... And another poem that is the, quote, 'Now I need a holiday from my holiday' poem is 'The Fish Underwater Had Great Colour' - 'Did you see my photo of the horizon?' to its summation 'But I missed my pets/ All of my postcards were mailed from here.'

Emily uses a Steinian or Brainardian or simply a repetition-device for her long poem 'Today' (which appropriately quotes the grand dame de longpo - Rachel Blau duPlessis - 'multiple exposure to the bright debris').The word 'today' begins each line in a series of sonnet length stanzas that run on at a good pace. The word 'today' gives the experiment a slight breather. It's over eight pages long. It's a great list poem - 'today an employee tries on Judith Butler's chapstick' - 'today a princess bites off her plait' - 'today a group of friends witness bioluminescence' - 'today absenteeism is an ongoing problem' - 'today I give away my copy of Barf Manifesto' (actually, that's by Dodie Bellamy, I don't know why Emily would give it away...)

Is 'blue' for poets -  is it our word -  is it our colour? Just like 'yellow' is there poetic implication in simply saying the word? 'Blue'. Emily has a distinctive take on this truism and on blue associated with Sydney in particular, like, say, the clichéd association of exaggerated "harbour" blue in, in my opinion ghastly, Brett Whiteley paintings. In her poem 'Blue' Emily says  'Yet the word blue I can't stand thinking about/though I can mouth - blue - on or off mainland.'

Emily Stewart's poems provoke all kinds of connotations at the edges of meaning. They knock into each other both by design and by chance. The blurb says "this is poetry that moves" - it does - but I'll change that to "this poetry has kinesis".  These poems provide a variety of stimulants for any time of day and any kind of mood. I wish Knocks every best possibility and open reception on its coming trips through the ozpo zone and I wholeheartedly commend this remarkable debut book of poems to you.

'a thinking thing' - karen volkman via brian blanchfield to here...

There are in our existence spots of time
That with distinct pre-eminence retain
A renovating virtue, whence . . . our minds
Are nourished and invisibly repaired;
A virtue, by which pleasure is enhanced,
That penetrates, enables us to mount,
When high, more high, and lifts us up when fallen.
This efficacious spirit chiefly lurks
Among those passages of life that give
Profoundest knowledge to what point, and how,
The mind is lord and master–outward sense
The obedient servant of her will. Such moments
Are scattered everywhere, taking their date
From our first childhood.
from The Prelude