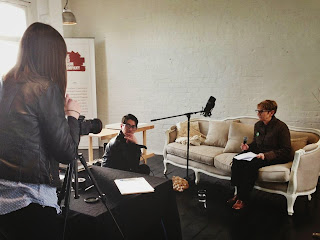 Lyrikline : Can you name one or two (non-English language) poets who have been particularly important for your work, and say something about how they’ve been important?

Pier Paolo Pasolini. His Roman Poems - I liked these poems especially in the 1980s, when AIDS was beginning to become prevalent in Sydney and poetry was evident in gay political performance. Pasolini seemed to be someone who could write emotionally and politically at once.

Early on, I liked Europeans as various as the SerbianVasko Popa, the Czech Miroslav Holub, French Paul Valery, Russian Vladimir Mayakovski then later, the French Valery Larbaud, who wrote as A.O. Barnabooth, his travel poems but, for me, the European stayers are Guillaume Apollinaire and Blaise Cendrars, who I still read.

Apollinaire is ironic, sometimes a little bit bitter, witty, elegant. He got rid of punctuation early on in the C20th and experimented with calligrammes and so on. Cendrars is louder, more visceral, but also funny and smart - I love his energy, there's something boldly chaotic and colourful, almost synaesthetic, about his poems. I guess I like them both also for their wry sides.

My favourite contemporary foreign poet is the Flemish postmodern poet Dirk Van Bastelaere. His book of poems translated into English, The Last To Leave, is terrific - speedy, percipient, funny, sceptical.

I read them in translation but I have written a poem - My father the pope, Mon père le pape - in English & French that emulates Apollinaire. I have also emulated Blaise Cendrars, in English. I can read French reasonably well, although I'm out of practise at the moment, and rust can form.

I trust Ron Padgett's translations of Blaise Cendrars because Ron Padgett is a clever, minimal humorous poet himself and he 'gets' Cendrars. With Apollinaire, I read various versions - Donald Revell, Pepe Karmel and so on but I like the old Oliver Bernard translations from the1960s most. And then I often ask my partner, Jane Zemiro, about the poems - she is a French language expert. She has translated a collection of my poems into French. It's a bilingual edition called Alibis coming out with Société Jamais-Jamais early in 2014.

Lyrikline : You’ve been active in a lot of influential poetry/art scenes, self-publishing and printing, the Coalcliff group, Jacket. Was there always a lot of exchange between those groups and writers and artists from overseas? Has the situation changed with things like internet communication/communities, etc.?

No, although we were reading widely from foreign material, there wasn't much exchange with overseas poets in the early days. I began corresponding in the 1980s - meaning sending postcards, exchanging books and writing short letters - with US poet Eileen Myles before the advent of email. We didn't meet in person until 2003. Ken Bolton published some North Americans in 'Magic Sam' magazine in the late 70s, early 80s. Kris Hemensley and Robert Kenny were publishing European and UK poetry in their magazines in Melbourne in the 70s and, in the early 80s, Melbourne University's 'Scripsi' magazine had a European focus - so I read those.

I worked at the 'experimental art foundation' in Adelaide in the early 80s and there was much more exchange with overseas practitioners in the conceptual (post-object) experimental art realm than there was in my particular scene of literati.

In 2002, when I was 'Overland' magazine poetry editor, I edited a small feature of overseas poets as a co-production between 'Overland' and 'Jacket'- obviously it appeared online in 'Jacket' and in print in 'Overland' - at the time 'Overland's motto was 'Temper democratic, bias Australian' - I thought my feature opened the magazine up to international poetry a bit.

The internet changed everything. I have become friends with overseas poets whom I met initially on the web - people like Susan Schultz, Maged Zaher, Rachel Loden, Rachel Blau DuPlessis, Jane Joritz-Nakagawa and others.

I worked for six or seven years as an online editor for 'Jacket' magazine and have guest-edited an issue of sound poetry for 'Ekleksographia' online magazine. Jesse Glass from 'Ekleksographia' and Aha Dada Books published an e-book of my poetry called the meh of z z z z - it's free and always available. Like everyone else, I am online talking, publishing, commenting, joking, getting annoyed, being swamped by poetry information etc etc. I have a blog called 'the deletions'. Collections of my poems are also still made as hard copies.

Return to Interviews or the deletions or Pam Brown site
Posted by pb at 6:26 PM