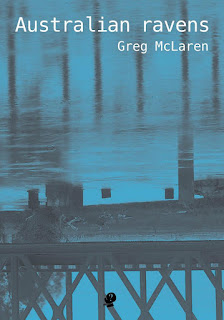 My totally predictable response when Greg McLaren told me his book's title was 'Stone the crows!' Anyone who knows Greg knows that in everyday life he is an extraordinary punster. So he kind of asked for it.

I guess that in order to be a persistent punster you also have to know correct English - so Greg is pedantic about the local, familiar, big shiny blue-black birds in calling his book Australian ravens - of course, 'Australian ravings' is another really far-too-obvious paranomasia any fun-loving poetry fan might make.

Anyway, crows, whom most people already know are pretty smart and can remember and recognize faces, are also actually capable of analogical reasoning. That's usually attributed uniquely to humans but, crows can solve higher-order relational matching tasks just like humans and other primates can. Crows also gather in a group around the bodies of their dead, holding 'crow funerals'

Superstitiously, or spiritually, birds are generally known as messengers or spirit guides. I guess they could also be called 'angels'. Greg's ravens appear early in his book in a poignant poem written in memory of a friend, the late University of Sydney teacher and poet Noel Rowe -

Five days, I was followed by ravens:
on fences along New Canterbury Road;
perched on a hospital’s sandstone wall
at Paddington; in the air
above Villa Maria.

The flavour of salt is slight,
at the corners of my mouth:
there is a word I meant to say.
I could never get my mouth
to move wholly around it.


The ravens are revenants. The poem is open, vulnerable - I think this elusive slightly-salty word could be 'love' but then in such an affective instance there's probably no word that could fit the feeling - there is simply a mysterious notion that language should work - but it's never authentic enough. This poem is sensitive -

Here, the open church-front air,
in the company of friends,
a creaking wheel in the trees:
cockatoos swooping, heavy,
between buildings.


My hand makes a silent language
with my soft black hat:
skin against felt, turning
it slowly, a fidgetty symptom,
giving away nothing.


In earlier poems in the collection Greg revisits the Cessnock region of the Hunter Valley, where he grew up. He checks the google map of his past and recalls friends - boys with specks of coal on their skin having a lark smashing bottles and riding bmx bikes in old quarries - these kids either out of touch now, or dead.

Coal mining was the local industry and poems like 'Pit time' record Greg's family's experience and his own youthful reaction. His grandfather -

just shunted the coal skips,
went on strike when his mates did,
and stayed out of trouble.

At the age he was
when he was put on as a pit boy,
I was thinking of cars, or trains,

and how far away and how quickly
that would take me
past that close ring of towns,


I thought, for a moment, of the railway worker poet John Shaw Neilsen but then Greg's lyricism, or I suppose what could be called 'tone', is his own, and as he notates a singular yet familiar Australian kind of 'everydayness' he is also political. He presents a poem called 'Coon Island' - that disparaging name belongs to a place near Swansea on Lake Macquarie -

a swing creaking with utes, and the Awabakal
siphoned out of Swansea like a euphemism.
Soldier crabs hive back into the grey mangrove
grit at the slightest movement. A flap of colour

from the caravan park across the dirt road,
cars moving, tents going up, and in the annexe
of one of the vans, your grandmother’s voice,

recalling her trip around Australia, when she saw
two aborigines fucking on a beach in daylight
in the middle of nowhere: I know

we treated them bad for two hundred years but when
we seen that, that’s when I didn’t have no more pity
for any of ’em.

Greg's poems are for and about friends, family, other poets, Peter Kirkpatrick, Bruce Beaver, about the wondrous stuff that's on the everyday ordinary boulevard like, say, New Canterbury Road.

This is not the fertile
soil of Aso’s plains, the paddies
abutting on houses, clumps of them like
crews of stumps, and the green plains

where battle scenes from the north
of a hundred and forty years ago
were glazed onto celluloid, featuring
Tom Cruise – gadgetised culture, which makes

poets like Harold Stewart or Robert Gray
unnerved: try reading their poems of Japan
modernising, mimicking the Straya
they’d put behind them.

This rambling-yet-precise long poem is a kind of ode to contemporary Japan. It also reveals mild traveller-envy in dialogue with someone who is in Kyoto at a time when Greg is clearly not -

He's been reading Dogen Zenji, the 13th century Japanese Buddhist priest who was disappointed in Kyoto's Buddhism & so, went to China for five years, to seek out a more authentic Buddhism.

Walking around Petersham
under the full moon –
what? it’s dawn already?

In the thunderstorm,
mid-arvo, currawongs gossip
between the lightning.

Hugging my knees,
squat on the ground, grieving
for my friend the priest.

The haijin pissed, passed out
on the wet cobbled laneway,
covered in sakura.

The raven on the wire
all day in Petersham,
pining for Petersham.

his last entry in this engagement is pithy-Japanesey -

There is another incredibly various set of connected poems set in the outback, in Broken Hill, Silverton and surrounds. These poems are atmospheric yet detailed, they're crammed with imagery, attitude, folklore, and elegant description of a mass of things - the old diggings of mining towns and ghost towns and their popular culture - the Mad Max movies, saltbush shrubs in a cemetery. It's dry, it's colourful, it's totally recognizable. It's a travelogue, an outback adventure, a road poem complete with bugs all over the windscreen. It's a visual panoply, it's a mixture of myth, recombination and revision, and it's brilliant.

This leads into a final section called 'The Blue Gum' - which Greg says he wrote under the influence of Laurie Duggan's 'Blue Hills'. The sequence begins with a kind of ode to the Sydney blue gum - that great aromatic eucalypt that gives the haze to places like the Blue Mountains.

The notational Blue Gum poems comprise a very complex, very mixed impressionistic record of childhood days. A record of living in 'the country' before mobile phones, with references to darker deeds - rape and murder in the shade of an old Post Office - these things that freak children out for life - an oversized tour bus stuck all night on a country road, local drunken bullies, houses burning down, relatives that leave traces of a grease and oil everywhere they go, a ten year old boy fighting with his brother and attempting to hang himself under the house, a dead dog rotting behind a toilet block. These poems are powerful and often claim a kind of justified bitterness-

What we call the country
is a scatter of loose and planted suburbs
where workers need to live – the outer rim
of cities they hate to go to.

In the end the memorably unsettling situations in the Blue Gum poems are redeemed by contemporary love, a new life, a new born. La Vita Nuova in the inner west.

So - Australian ravens is actually quite wonderful. The poems don't need me to analyse or endorse them (though I do!). We can read and think and enjoy and savour and be disturbed, enriched and surprised by them.

I'm here to say that I think they're all terrific. I loved reading this book. It's a diverse and, even in its everydayness, an elaborate experience. Greg McLaren is an original poet - he's the real thing. I commend the book to you - it's definitely something for Greg to crow about ...