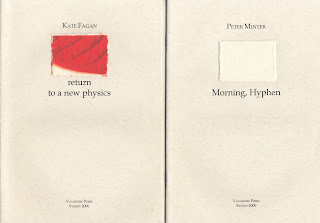 
Kate Fagan's is a cleverly titled booklet - return to a new physics. Remember "the new physics" back in the early 1980's...parallel universes, The Dao of Physics, psychic energies scientifically proven and so on?
Reading Kate's selection of poems had, for me, an effect similar to those gently imploding op-art screen savers set on the slowest speed - the poems' imagery floating into focus and then softly shifting off, dissolving away...

and pointing at nothing
as it empties

we sift and pull among
calm strings of zeroes

These poems are calm and serious. A kind of philosophical doubt or scepticism, not quite abstract but almost, pervades these poems - like posing this question

what kind of artificial nature
is this?
infinitely repeatable
prized and cultural
the local avoiding
sentimental anecdote

we tease apart a rain
of spectra

how to distinguish
sight from perception

and there's a hint of her own method and the slant she takes. Kate writes

leaning into description
pulling on letters
as they shift

These twelve poems are extracted from a series of 45 poems - written in correspondence with Peter Minter and just as Kate offers the reader a hint to comprehension or meaning Peter offers at the start of Morning, Hyphen a clue to cracking the code of his particular language-play

From beginning
& bent to break syntax
your beautiful rush

Peter's poems celebrate incongruities, well, really, they revel in incongruity...they are not linear, not rational - you should suspend your brain's insistent quest for meaning and surrender, give yourself over to these poems - each poem here is written in tercet stanzas followed by a short paragraph of poetic prose - so the structure is quite formal although Peter applies a principle of indeterminacy - so it all appears neat and tidy, contained, but when you enter the structure you enter the imaginative realm of wily language strategies - it, language, being an especially complicated transmitter of imagery, sense, & thought...in that sense, the experience is a bit like clicking around or through Riven.

Peter offers a relief, some corners to touch but not grip, in occasional echoes of the quotidian-
'black crows rising over the city as you think to walk into leaving'

And you’ll find many instances of pure poetic poetry in Morning, Hyphen

My whale skin seeps out black sand & redevelops belief, decay
in the guise of miracles fallen.

These poets are both engaged in language-play - language-art that anticipates, in poetic terms, the future or does it ? Only time will tell but, for the moment this play subverts and challenges old ossifications, chipping at them, breaking them down....and it's an enjoyable, stimulating reading experience...The paradox is that although this broken syntax and lateral placements represents the times - a digital age – you still only need a pencil and paper to make them.

Kate Fagan and Peter Minter – congratulations ! To borrow a phrase from a launch long ago in the old analog millennium...."I now declare these booklets open !"