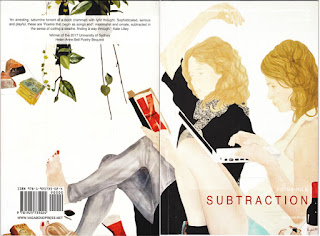 Launch talk at University of Sydney, 28th May 2018

I last heard Fiona Hile read poetry here alongside six other shortlisted nominees for the 2017 Helen Anne Bell Poetry Bequest Award. It's a bequest that offers a modest cash prize and publication for the winning manuscript by an Australian woman poet. Fiona received the award and so that also funded the publication of her poems with the dedicated, diverse and dynamic publisher Vagabond Press.

So now we have this book called Subtraction. Of course, in arithmetic, 'subtraction' is the operation of removing objects from a number of them or, simply, taking something away. Given the title, the book's fascinating cover is apt - it's a detail from Helen Johnson's painting called 'Things People Say They Should Give Up'. A woman leans back with one arm extended upwards in a feline stretch as she's engrossed in reading Karl Marx's Das Kapital. The other woman is using a laptop - we can speculate on what she's doing - there's a bunch of 50 and 100 dollar notes and what I take to be hunks of tuna under a trailing vine and, in the corner, just slipping off the cover, there's a very canny product placement - a bottle of Penfold's Gr... 'Gr' - it has to be 'Grange'. One question is - Who would have a bottle of Grange in the first place? Probably not a poet. The only person I can think of who 'gave one up', so to speak, was Barry O'Farrell (that's a New South Wales joke). Perhaps the poet, the painter, or the publisher might send an invoice to Penfolds for the product display? What would Karl Marx say?

Anyway - to the poems! (I should preface what I'm going to say with 'I could be totally wrong'.) A phrase 'the alembic of her line' was once used to talk about the poems in Fiona's first book Novelties and in this new collection she continues to transform and refine language through image and even to amplify that technique as she delves into an examination of an age-old, complex conundrum. I'll quote from the online flyer notes for this launch because they're more succinct than I might be - 'Taking its cues from Rimbaud’s call for the reinvention of love, Subtraction tours the hologrammatic labyrinths of the English language to ask again: What is love? And what does the other want?'

'Hologrammatic labyrinth' is a great term for Fiona's poetry. The intensity of these poems' persistent and kind of heady rush of imagery might cause a minimalist poet (like me) to lose sleep. The rush can sometimes seem like you're streaming glossolalia but happily Fiona's poems, although forceful, aren't actually charismatic, so they're not trying to persuade or sway anyone - they're investigative - of both poetry and their topic, 'love'. There is a sense of method in the clusters of images and scenes, or vignettes. The idea and the main question is foregrounded, so once you tune in to the theme you can surrender to the totally impressive offbeat and unpredictable connections and abutments.

Fiona gestures to philosophy in these poems. Though we know that philosophers and poets haven't really got along very well since at least the 4th century b.c. when Plato banished poets from the republic. Nonetheless, Fiona does read philosophy. Plato's academy had an inscription engraved above the door - 'Let no one ignorant of geometry enter'. The still-living French philosopher Alain Badiou might have had an influence on Fiona's writing. In his book on twentieth century writing, The Age of The Poets, he revisits the Platonic antagonism between poetry and maths. Fiona's book's title alludes to a connection with mathematics. She also selected the poems for a recent issue of 'Cordite Poetry Review', her chosen theme was 'Mathematics' - though Fiona has said that she's not really into maths.

In Subtraction an occasional guest is the precursor to existentialism, early 19th century philosopher Georg Hegel. Along with his theories of the spirit or the 'geist', Hegel had things to say about the connection or function of desire in the everyday world. And these poems consider exactly that.

In Fiona's poem 'Recollections of the Mortal Body' - set in the local swimming pool - some lines go - 'your silicone shadow glimmering against the hurricane,/ like love as the fiction of a sublime pragmatics,/ the aluminium waters sinew and repeat: shame enters/ only through the recollection of the body.' That last line, direct from Hegel.

And in that poem, from Greek mythology, Leander, the young lover of the priestess Hero, is introduced. He drowned swimming across the Hellespont* to visit her. From the poem -'So let the wisdom of folly unfold in lettered wings/ and tell me again how Leander crossed the hellespont/in a flurry of greased-up limbs.'

In a subsequent poem, 'Swimming to Leander', using tercets Fiona imagines young Leander - '...If stung by jellyfish,/ carry on. The last time I saw you, unbuttoned to the whale,/ caressing like a chook on heat./ To whose banquet were you hurrying?' //'Keep your eyes underwater when next you swim'// 'As for love, stop worrying, I am potential/ biological immortality in at least one species" - the poem ends with an oxymoron -'Grow me a science of emptied hieroglyphics/and I will pinpoint your location with stochastic accuracy'

'Stochastic' - a term used in statistical analysis. It's about having a probability distribution, usually with finite variance - so it's imprecise.

In a recent conversation Fiona mentioned a part of the Greek myth in Homer's classical epic poem 'The Odyssey' that's perhaps an analogy or at least a suggestion of what function writing these poems might have proffered. While Odysseus's consort Penelope waits for a decade for him to return home from Troy to the island of Ithaca, she uses weaving as a device to turn away over 100 advances. Penelope tells these many suitors that she will marry one of them when she finishes weaving a burial shroud for Laertes, Odysseus's father. It's a fib. She weaves the shroud during the day, at night, away from the attention of the suitors, Penelope undoes the weaving that she'd done that day - it's an artful yet labour-intensive defence - the weaving and unweaving perhaps similar to the process of making poems. In Subtraction the conundrum of encounters with the possibilities or absence of love is unravelled, but here the threads or lines haven't all been discarded.

The poem 'Muster' is about this process, this 'unravelling' - I'll quote the final section of it - 'I stand at the rim of a system of infringements, codes/ and punishments to rival the ancient Greeks. Talking down/ from a position to differential, the coxcomb coral of six/ fingered bounties makes love to the idea of the voice/ making love to itself, establishes an iconic, incurable/ distance. Now I dream during the day and write all night,/sewing a template for the region of your delirious.//While you spiral freely in the conundrum of lost territories,/ harbourless wanderings distill my ingrown love.'

To change tack now and briefly reveal Fiona's breadth of interests - Situationism gets a look-in here too. In the 1950s the Situationists wanted to disturb the categorization of art and culture as separate activities and to transform them into part of everyday life. A poem called 'The Inevitable Beauty of the Viewer When Faced with the Partitionist Tactics of the Situationist Lover' is astonishingly deductive. Again, to quote : 'Nothing to see in the spectacle of your lips/ but the insistence of the letter in the mire of situationist abandonment./ Keep telling yourself that/ the poem is a container for the formless horror of your eyes as emotion/ skinning you to the scrutiny of the automaton as inadequate/ representation of the poem as a container for the formless/ horror of the delimited passion of the never stops not being written'

But myths, maths and philosophy are just three components in a myriad. There's much experiment with language - there's dada, metonymy, proper nouns as verbs and so on - plus, the poems offer plenty of humour. Popular characters appear - Bob Dylan, Hank Williams, Emily Bronte, Lady Chatterly, Steven Spielberg, Kate Winslet - whose last name becomes a verb - Chrissy Amphlett - 'now that Chrissy Amphlett's gone/ what more is there to say?'

Given the exigency of my alloted 10 minutes that I've probably gone over, here are a few favourite lines, without comment -

'If the syntax won't admit us we will have to break it.'

'The slum landlord in your bed massaged you to tenancy...'

'A handful of wax and a fathom of chain means/love is close, desire is far away.'

'The appeal to nature confines us within the limits of natural numbers./There is something mundane about the way we love./ And yet, in the hedged bets of our narrow beds we are alive to thrill.'

These poems are doing a lot of thinking around both the renunciation and the pursuit of love and/or desire. That's a big topic. Some say poetry resists the concept of use value - its function is to make culture - poetry is thinking about thinking. It's something that I'd say Fiona Hile does round the clock.

These are wonderfully difficult poems - I can't say that I've figured out everything about them and I've presented only a smidgen of their references and concepts - I didn't even mention Heloise and Abelard, John Keats, Edmund Spenser's Calidore, the knight of courtesy, (adlib : not even maybe o I dunno - Michel Foucault?!). Which is exactly why I'd suggest that this book will be read, reread, and read again. There's plenty to impute, to love, to think about, to laugh with, to be both perplexed and charmed by and, overall, to take pleasure in appreciating the superlative artistry of a poet whose presence in Australian poetry signals a unique rejuvenation of the genre. It's a complex, fabulous set of poems - congratulations Fiona!

NOTES:
*Hellespont - the ancient name for the Dardanelles, named after the legendary Helle, who fell into the strait and was drowned while escaping with her brother Phrixus from their stepmother, Ino, on a golden-fleeced ram.

FH in an email to me: And maybe the whole book could be said to perform writing as a way of calling love into being and also keeping it at bay. Or writing installed as a more bearable fake obstacle to the absence of love.

more fave quotes - no time to say them :

'How can you say you don't believe in Spring/ when our trajectories collide with calamitous outbreaks/of Physics?'

'Caritas carved deep into shallow stone/ filters lime-wash through purple hashtag tunnels./ Am I a woman or a man?'

p.s - 'Stochastic'- incidentally there's a tea room in King Street Newtown called 'Stochastic' - I'm not sure what the service would be like.