A few pages into this collection we read the line: ‘all of it is lies’. ‘It’ signals the irritation that motivates much of Pam Brown’s writing in click here for what we do. Memory, in these poems, is a problem. Brown’s is very much a poetry of movement: she desires to stay light and mobile, not to be detained by memory (in this way she sometimes brings to mind a serious hiker, weighing the items in her pack by the gram). And yet, she cannot help but take on that extra weight of the past; her present is perforated by it. This dialectic of memory and forgetting runs through the collection. For Brown especially, there is no satisfactory point of rest or synthesis: it is not only memory’s burden that she has to contend with but also the particular ways that the memories of her own generation of sixty-eighters have been imagined and historicised.

The third poem, ‘Susceptibility Song’, contains the most extended invective against ‘the past’: ‘discarding the discarded / tired of the past // finished with recounting’; ‘erase / remembered moments’; ‘forget it // never retrace steps / cancel the lot’; ‘the past is / stifling’. On the page following this imperative to ‘cancel the lot’, illustrating this double helix of memory and forgetting, Brown describes some of the things to be forgotten, thereby remembering them. Her circumspection in the poems comes across as honouring the integrity of that collective and individual past. Memories appear, but only as glimpses, as if the door must be quickly shut lest they escape and mutate. And yet, for the reader, the excursions into the past are gifts amid the otherwise predominance of present tense. Following a discussion of spartan furnishing aesthetics, a beautiful, brief memory appears of an empty room from Brown’s past, its two occupants, ‘high on cleanskin / & cynar’.

Brown’s poetry, particularly of the last twenty years, works the realm of the minor and the non-transcendent. It proceeds by hesitation, doubling back, self-questioning, and is heavily shaped by the time of its writing. The form of swaying, concatenated fragments is continuous with Brown’s previous collections; the difference is in the dimensions. Each of the four poems that make up this volume are longer than any single previous poem of Brown’s, and are interconnected to the degree that the work could be read as one long poem in four movements. One result of this increased length is that there is simply more middle to these poems; they keep going, past the point that close readers of Brown’s work might expect them to begin shaping towards an endpoint, creating an effect palpably reminiscent of the infinite scroll feature of web design. (Incidentally, some of the material in click here for what we do was first published online: a format which suits these longer poems well, being able to present their verticality in a way the codex book cannot.)

The poems acknowledge various horrors, as these are relayed through the news cycle. At times Brown seems to throw her hands up in desperation. What there is not is a wintry acceptance of the status quo. In ‘Susceptibility Song’, a moment of hope appears with news of the ‘Uluru Statement from the Heart’, which was finalised in May 2017. As the reader of this poem knows, and the Pam Brown writing this note of optimism does not, the Statement’s recommendations were summarily rejected by the Turnbull government several months later. And yet this section and its situational irony remain in the poem, testament to Brown’s loyalty to a process ethos, to thinking and emotion within the time of writing. This loyalty can at times be exhausting; when a different tense appears – a past tense, a conditional – it comes as a relief. There is anxiety in this mode of writing, and simultaneously composure, steadiness. The poet may throw her hands up, but the poem continues.

The second poem, ‘Left Wondering’, transitions between fragments of lived duration and observations on a variety of topics: fragments of a letter, a discourse on ‘rejectamenta’, a note of gratitude for having lived ‘in the time / of so many / women of influence’, and four pages ruminating on the topic of the painter Agnes Martin. Right at the end, the poem arrives at the contention that to understand abstraction you have to ‘ask the women’. The rightness and clarity of this is immediate but it is also underwritten by the ‘working out’ that has preceded it, the poem’s rhythmic, overlapping thinking. We are fruitfully ‘left wondering’, encouraged to track back to work out how it was we arrived here.

Which brings us to the imperative title of this collection, in which the ‘here’ to be clicked is non-compliant, a dead link: tap it and nothing happens. As with so much of Pam Brown’s poetry, we are not offered an elsewhere, but attuned to where we in fact are. 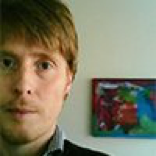 Tim Wright is a reader, scribbler, and occasional university tutor. He completed a thesis in 2015 on the poetry of Ken Bolton, Pam Brown, and Laurie Duggan. He is the author of The night’s live changes (Rabbit, 2014). His collection Suns will be published by Puncher and Wattmann in 2018.