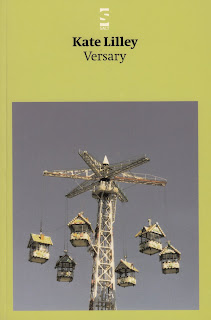 Kate Lilley’s poetry is resolutely ‘literary’ and although it’s probably preferable to have some knowledge of rhetoric, semiotics, and postmodernism it’s also quite possible that you can get a huge variety of pleasures from reading Versary whether or not you know anything at all about poetics and its influences.


In a review of Versary in The Age newspaper (1), Gig Ryan wrote that the poem Sapphics satirises academia but as it begins with a psychoanalytic axiom – "Transference fucks with your head" - it can be imagined differently, as a kind of minor mental breakdown. It uses fragmentation - stanzas and lines that are like diaristic scraps. But it’s fruitless looking for pentameters or dactyls in this sapphic. It seems that Kate Lilley makes a conjecture of her own practice. It is as if she tells the reader "I know the terms of reference but these are the poems I want to write, this is the way I use them". Many of these poems play on traditional and sometimes rare poetic form – for instance, Mid-century Eclogues , Elegy and Georgic. There are also many examples of stanzaic structure like the tercets that comprise Black Letter and the apparently incomplete poem of only two quatrains, Formes Frustes, where the incompletion exemplifies the title, and a set of pantoums called Mint in a Box. Mostly though Lilley ditches fixed stress, syllables and rhyme schemes and opts for a kind of allusive jumbling of tradition so that the reader is neither distracted by it nor has to tolerate it.


One of Kate Lilley’s academic areas of expertise is seventeenth-century English women writers (in particular Margaret Cavendish, Duchess of Newcastle (2)) and in Versary Lilley demonstrates a certain relish of the language of seventeenth-century poets. She quotes from Thomas Browne’s Urn-Burial to open her own poem Sapphics – "Time hath endless rarities, and shows of all varieties". In Black Letter’s ten scant stanzas Lilley delights in using arcane italics and capital letters and in reclaiming obsolete words from Browne like "diuturnity" - meaning, according to the O.E.D., "lastingness" or "long duration".


Lilley’s playful, celebratory use of language is rich yet never dense or florid – the poems are actually all economical and sparse – each phrase or sentence is deliberated with finesse. Lilley’s lingo-revelry is often camp, incorporating bizarre advertisements ("The vanishing SOLIDA Non-plus-ultra Hairnet with Transpa-Knit makes all other hairnets obsolete") and objets d’art which reveal an interest in kitsch. The author’s notes say "Nicky’s World is the name of a collector’s plate commemorating the long-running American soap opera, The Young and the Restless". The poem Nicky’s World (which is the book’s opening poem) is a darkly comic and pleasurable critique of the tv soapie.


To describe Kate Lilley’s poetry as "often pithy" would probably greatly amuse her but it is that and there is also a kind of jaunty optimism that undoes any possibility of lyrical wallowing. Here, there is no hint of redundancy where communication is compromised or overwhelmed by message or narrative. This poetry has a semantic dimension that is open and, mostly, not coded, as it cruises through a recurring postmodern lyric of loss or yearning in poems like Countrypolitan – "Many words are falling you don’t care/wasted lips forget and have some fun/each time you leave I make a vow/ this will draw the line". Although there are some slighter confessional moments in Panic Stations and in the potentially erotic, descriptive poem 1972 – "After the dance we cross the oval in pairs/to the steep bank behind the softball field./the hall is bolted shut, teachers pass in the dark,/smoking and talking on the way to their cars./It’s cold on the, my buttons loose to the sky"- this tendency is redeemed somehow by later complexity in Prosopopoeia – "Isn’t it clear which characters are ghosts?"


There are so many wonderful ideational lines and phrases in Versary that I could end up quoting most of the book – "Spackle what you can’t amortise" , "a festival of moss", "busy accents cheapen off the rack". There is a sensuality throughout the collection that becomes sexy in poems like Spruce – "Cancel my vendetta vanilla me" - and in the sardonic Affect Ensemble where Lilley simultaneously undermines received notions of femininity and retains sexiness – "You can scan my glowing interior/and write down what you see there/thou hast curiously embroydered me". Lilley can also be very funny – in Finally "I hear the voiceover from the start of Dirty Dancing/playing in the lounge and feel sedate/sedated/ like one more krispy kreme would set me up for life" ; In the Sun – "Talk as long as you like,/the x-ray believes my story/is an anagram of yours" ; Mid-century Eclogues – "A nest of tables is a talking point/when friends drop by uninvited/instead of making yourself a nuisance/pass the finger food" and in Post – "Can modernism get any later ?"


The contemporary U.S. poet Arielle Greenberg is currently developing an aesthetic theory that she calls the "Gurlesque". The term describes women poets raised during the feminist years of the 1960s and 70s who now, although they are from different backgrounds, share a commonality in their writing. Poetry that combines "the serious and the frilly" and that has "a particular way of writing through and about gender". Greenberg says "In Gurlesque poems, the words luxuriate: they roll around in the sensual while avoiding the sharpness of overt messages, preferring the curve of sly mockery to theory or revelation.Gurlesque poems are thoroughly enmeshed in the visceral experiences of gender; these poems are non-linear but highly conversational, lush and campy, full of pop culture detritus, and ultimately very powerful"(3) I would say that Versary could be included in the Gurlesque repertoire.


Perhaps some of these poems could have made use of more cars and trains or, even, road trains, or perhaps more aptly, car and train crashes, rooted as they are in the white blues music of Country & Western. Many of the poems are performative. That’s not to say that they’d always work well or "better" in performance than on the page but that Lilley is signalling performance via titles like Illocution and Prosopopoeia and that she revels in the awkward romantic theatricality of Country & Western - a genre of disappointment and lost love - "When she holds the microphone to her lips/ and whispers mine is a lonely life/ it sounds like a radio tuned to the end of the world". It’s also a genre of desired escape and transition through travel. Hank Williams’ song I Can’t Help It If I’m Still In Love With You provides the first line in Lilley’s poem Hobohemia –"As I brushed your arm and walked so close to you". The title Hobohemia itself invokes the 1930s songs of Jimmie Rodgers about unemployed itinerant "hobos" jumping freight trains in the USA to find work (the Australian version of this being the swagman). And the cover image suggests the travelling side-show – an aerial carnival ride with little decorated cabins suspended aloft above the world, awaiting spinning. Versary puts paid to the widely-expressed complaint that cultural studies has pushed poetry off the list in the academy . This is a poetry that combines a multifaceted pop culture and the higher arts of poeisis in a refreshingly uncontrived way. They seem to have been written effortlessly.

This review was published in Southerly, the literary journal of the English Department, University of Sydney in 2004