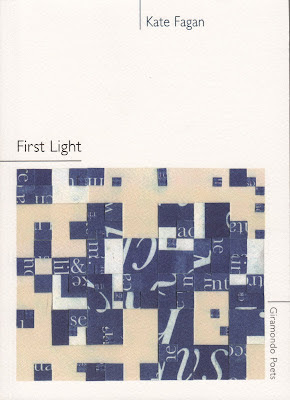 It is terrific to have, at last, another set of poems by Kate Fagan gathered into one collection. Kate's first book, The Long Moment, was published ten years ago now. In a blurb for that book I wrote that Kate's 'meditative lyricism informs a knowing philosophical scepticism'. I also said that the poems' imagery was like a gracefully imploding op-art screen saver and I think that now I could say something similar about First Light, except that now the lyricism is less meditative, the screen saver imagery has become more insistent and the scepticism is more evident. These qualities sit alongside details of the actual world, and the developments in Kate's life in the past decade.

The 'threshold' has been a trope in women's poetry for a long time now. Perhaps it's a reflection or indication of feminine mutability, of not wanting to be fixed or tied down - or perhaps it's an echo of the Pre-Raphaelites and the convent threshold, a private yet structured location for women. Each of these associations is possible. I think many of Kate's poems are on a threshold or a brink of a crossing, and they are kind of consciously off-centre, as she threads and links lines of thought and feeling.

They are imbued with a relational aesthetic - sometimes an intimacy and 'an interwoven private and public temporality'.(1) Kate has hopes for her poems and songs as being 'a true reflection of where art actually comes from: messy worlds and human connection.'(2)

Her poetry has obvious lyrical elements -

I will leave before summer
returns with its lilting cuckoos
and resonant air, before your taste
disappears from my tongue.

That's from 'The Correspondence' - a sequence that is literally letters-as-poems. The Correspondence' is also a response to a musical composition by Luke Plumb. They're a component of a piece called 'The Ten Titles Project'. Here Kate contemplates the concept of truth. There is an elegiac tinge to the entire collection but especially in 'The Correspondence.' In part, these are letters written to herself but also love letters that function as an anodyne to soothe a wound

This is an elegy for a rift
that will never be mended
-
Truth is rebuilt every day
from this melancholy.
-
You will return on a day that does not exist.
I will call this 'redemption'.
-
Carry my obsession past me
to the quick of feeling.

I think we can talk about modalities in Kate's poetry, especially given her parallel activities as a singer-songwriter musician and her keen awareness of what she calls the 'cadence of language'. She has said 'Poetry is an art of thinking in language. But it’s also a sonic art that sounds out the relationships between words and things, writing and speech, between our experiences and the way we hear them. I like the idea of an unquiet poetry.'

This poem is sonic. It could be sung -

Out where sun-sweet grasses
push at eucalyptus stumps,
where piney hulks
restrain the sky and cockatoos
crack succour

from sappy cones
before rising in a whump
of jewelly wings, where jumping
jodies teem cyrillic
over littered bark


There are also formal attributes here. In one poem 'The Octet Rule' the constraint is that each stanza is made of eight lines. It begins by quoting John Cage - 'The wind turns around, no longer/facing in its direction'. And although the poem is formal and conceptual it also, oddly, has l-a-n-g-u-a-g-e-y traces, where the concern shows how relations of power that inform the everyday are disseminated through language. Kate writes, outright, 'I find true authority unbearable'. So there are hints of this influence in the poem. It starts with a glimpse of reworked Walt Whitman

Engines roar, body electric
leaves outside. Comedy
is a kind of basic displacement.
A & B are lost objects competing
for primacy. If asked for a shape
I'd say: define cylindrical.
The poem is not exhausted,
atmosphere new on location.
=

So what if machines parody
future empires. An instinct
for novels, last ride home


This collection has a variety of types of poems, something for all comers - a long philosophical poem 'Observations on Time, Cargo' - 'I decide upon four themes:/ tragedy, character, temporality, locus' - in which there's a terrific encapsulation of laughter -
Laughing, the body falls through
a reversible current


And if you like punctuation, and I'm sure you do, you'll like the 'flocks of apostrophes' that 'skirt the 'bright obvious' still-house of speech.' There's also, following that 'instinct for novels' that I quoted earlier, 'A Book of Hours for Narrative Lovers' - that's nice ambiguity in 'Narrative Lovers', which is really not so much a story as a gracefully written series of spacy, short prose pieces.
And there are several incidental, in situ kind of poems in the section called 'Authentic Nature'.


You'll also find a reissue. The book collects the ephemeral poem - 'Thought's Kilometre', which arrived as if blown in on the breeze off the Tiber when I was in the poet's flat in Rome nine years ago. It was published by the mysterious 'Tolling Elves' -


here it is - a little pamphlet thing - 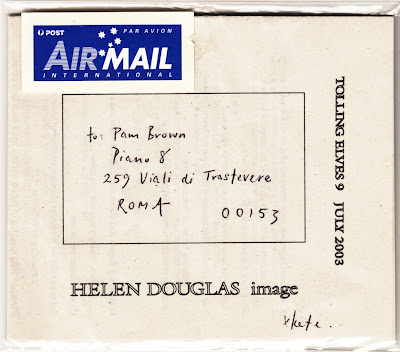 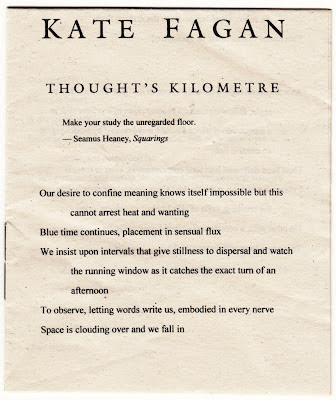 And now that I've brought Rome into it, I'll go back to the beginning. The second part of the book, the title section, comprises ten centos - inventive bundles of borrowed and recombined poems, each one dedicated to or written for friends and family. (That's Kate's 'relational aesthetic' again.)
Cento comes from Latin and used to mean a cloak made of patches. Roman soldiers used these centones, or old stuff patched over each other, maybe as repair or maybe as camouflage. The cento poem originated in the 3rd or 4th century. The first known centos were composed from works by the Roman poet Virgil (Dante Alighieri's mentor). Here is an extract from one of Kate's centos - it samples W.G.Sebald - 'Love of the Loveless', Cento for Tom Lee -

Pretty much alone with
the eye unrecounted,
heart almost telescopic.
A glorious early summer's day,
behind glass. At home with ever
greater frequency     I hardly
I heard I lived I didn't
I become. Old photographs
seem to have this, people walking
around you   never   always
empty
something
image
day
shine


Towards the end of the book Kate quietly introduces optimism into her poems via the pioneering underground experimental Soviet poet, Nina Iskrenko, who opened the way in the 1980s for a 'new generation' of Russian poets -

Nina Iskrenko wrote: the world tumbles and is caught
In consciousness a blazing future is predicted


In this blazing future my reading remix registers and savours First Light's quietly warped syntax - 'must a sentence stop and settle /I bend to drafts and read each tablet /a memory made haphazard in a high storm' - that is to say electrified by many of the flashes of phrases in these poems.

I heard someone say recently that poetry doesn't have a readership but rather it has a thinkership. To welcome First Light into the reading and thinking poetry world I have made a short cento from Kate's poems. It's called 'Blue or White'

the world was a little darker
before it was blue
brilliant as nowhere special to go
you could try double blinds
machines parody all future empires
say goodbye to the supermarket.
unbearable authority makes me dizzy
shocked by faultless mathematics
technicolour pesticides and diesel slops,
i turn away ekphrastic
into a new present
of geometry and truth, neo-conservative
precision, anachronisms make truth
a panacea for ego, and the gesture
troubles me, still asking
opposite questions -
talk less, mark slow time,
draw inconclusive ends, hope resting
with invention

Show us some of that hope and invention Kate ... over to you