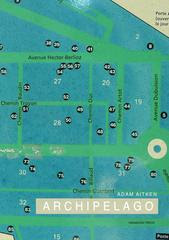 Adam Aitken has been writing and publishing for a long time now. In the early 1980s he was involved in editing P76 poetry magazine with Mark Roberts. They named the magazine after the P76 - a big car with a rushed assembly - the poor build meant that the car was a lemon - it's only remembered because it was a dud - so Mark & Adam memorialised it. (Briefly) In 2013 Adam co-edited, with Kim Cheng Boey and Michelle Cahill, the important Contemporary Asian Australian Poets anthology. He's also currently a part-time teacher of creative writing at this university. Last year Vagabond Press published Adam's memoir One Hundred Letters Home. Archipelago is his fifth book of poetry.

As you know France has been in the news - unfortunately, for terrorist attacks - just over a year ago in Nice in the south and also in the capital Paris, and more recently in the news for a change in political direction when a youngish neoliberal banker Emmanuel Macron beat off the nationalist right wing led by Marine Le Pen and, as we know, France will be contributing to the Australian war machine by building the submarines that kept Christopher Pyne elected.

A curious traveller, Adam Aitken is an annual visitor to France - usually to a small village in the south, actually just north of Nimes, where some of his partner Neela Griffith's English family are permanent expatriate residents. But during the period of the compilation of these poems Adam was lucky enough to also spend some time in Paris on an Australia Council residency at the Cité des Arts. Adam, as a continuous student of the French language has attended Alliance Française language classes for some time now.

So that's a sketchy background to this collection. There are a couple of quotes that introduce the collection - one from Roland Barthes 'Comment vivre ensemble...?' translates as 'Like living together...?' - an ellipsis and a question mark - hmmm - what augurs here? I'm not sure. I guess it's interculturalism ?

The book begins with the poet exposed to extremely cold weather and becoming obsessed with thermometers. The movement of the mercury along a red scale leads to a trail of images that conjure a watercourse, the tributaries of the river Seine, and slides from there to some boys growing up along rivers in the south of France - the lusty sons of big drinking farmers whose histories are lent dramatic monologues.

Cold weather persists in these poems. The Mistral, the famous strong, cold, northwesterly wind that blows from southern France all the way to the northern Mediterranean appears a couple of times. Farmhouses traditionally face south with their backs to the Mistral which has a mythical reputation for causing 'madness'. One line in a touching poem about a hoarder reads - "If you could buy the wind and store it forever/you would.'

"Not coming here to become what they see in you/you window shop till you’re broke or just pissed off – /(shit you really meant to write that)/reading phrasebooks over and over again/to a non-appreciative dog.

the poem ends comically with -

"To keep on doing this and never actually sit down to eat/or talk to anyone in French. But still,/Bengali’s more useful, or Swahili./You are about to starve, sweat-shops beckon."

Another instance of the question of Australian poets and France is in 'Letter from Paris' where "Slessor imagines Heine's Paris full of spires" - Adam jokes quoting Kenneth Slessor "'Ten thousand chimneys spume'-/a metaphor for the libidinous, maybe," and he wonders in his own 'spireless' version of Paris "Why in Slessor's poem all the women are gone from their 'miserable' lives?"

Adam tells us, and it's a relief, "I do not promise to make sense of predecessors/ who can't make Paris theirs" and, with that he lets it go and instead reports on yesterday's Alliance Française lesson's popular culture interview with Carla Bruni.

He ends the poem recounting that the 19th century poet Heinrich Heine, who spent nearly half his life living in Paris, "kept writing in German" and his partner couldn't read his poems - "Translating them into French/didn’t help her, but didn’t hurt./She was German, and only ever spoke in German./ The way the 10th is African, the way the 4th is poodles."

'Old Europe(2)' is a pacy poem about tourist Paris - filled with travel cliches - it's cynical and it's funny - "The Romanies sell puppies to lovesick tourists" and "The Eiffel Tower a blingy earring/on the ear of Europa." There's a drama being filmed beneath a "millionaire terrace" - - "the road a crime scene below, a day-for-night/with Citroen and cafe shoot-out./You might have to step over the body./I only come here for a summer,/for language, macaroons,/delicious cod. Good thing Cheryl/got the handbag she wanted she's/so persistent we filmed it."

Adam's personal poems here are clear and heartfelt and avoid the devices of artifice. 'Avignon-Paris TGV, Winter 2012' is a thoughtful, graceful poem for Adam's partner Neela -

"...that I am passing you by/and leaving you/in your deeply orange sunset/over the Auvergne //in some high-speed/French railway after-effect/that radiates the idea of you //that compensates for all that is too/distant and dark as matter//But we can see it, barely –/the way it brings us to ourselves/into the one thing,//our selves/all within the skin of the thing/I think about."

And the following poem 'Maruejols' memorialising the death of a hoarder who, although the poem doesn't spell it out directly, I happen to know it's Neela's mother for whom he's writing -"Some days we would farm our way/through your legacy/dipping into your library/brushing off a kingdom of silver fish,/working through the junk,/ in some sort of rhythm/and catch the intermittent bandwidth/ bouncing off the local mountain – an ecology.// Later, coming to empty your home, we felt/ the dark matter of your brain/and what came through it:" and there I'll leave it for you to read the things Adam records that made an important part of this woman's life.

There are poems dedicated to other poets - to Vietnamese poet Nhã Thuyên, for Aotearoans Jen Bornholdt and Greg O'Brien and a romantic poem or, rather a poem about Romantic French poets, for Sydneysider Toby Fitch - "where a homesick chauffeur wept/ for Verlaine's verse,/for the friend with the gas blue eyes" who can only be Arthur Rimbaud -

The final poem is called 'Rimbaud's spider - Lake Toba, Sumatra'. Some time in 1875-76, just after he abandoned poetry and a few years before he became a trader in Ethiopia, Arthur Rimbaud traveled to England, Germany, Italy and Holland where he enlisted in the Dutch army - but he deserted from it in Sumatra. This is an imaginative poem using a classic male/female metaphor, while gesturing (possibly?) to the Dutch takeover of Indonesia a couple of years earlier -"With all of Java’s crimes/(that history none must speak of)/hanging there like tear drops,/suspended in her web ..."

Arthur and his Sumatran spider -

"she carried on, the web/made perfect and complete./he her guest who overstayed/who never left, the one she chose to lay her brood within// that eats him from inside/infused with an acid to keep him fresh./For he would survive/on a spider’s sliding scale,/paralytic with affect/for each hour of night/sucking nothing else but violets..."

Archipelago offers an abundance of fascinating imagery and observation evoking many aspects of contemporary and historical life in France. I've mentioned only a mere modicum of the references and ideas in these poems. I encourage you to get a copy of the book and discover its breadth.
I congratulate Adam Aitken and wish his book a smooth trip onto the bookshelves of many readers.