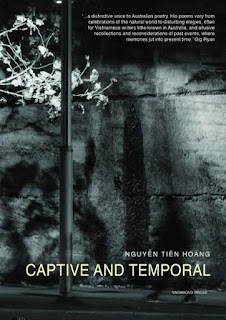 Born in 1956 in Danang, Vietnam, Nguyễn Tiên Hoàng arrived in Australia in 1974 on a Colombo Plan scholarship. He has worked as broadcaster and in IT. For over thirty years Hoàng has written under the pen name Thường Quán and has published widely in major literary journals in Vietnam, the USA and Australia. Hoàng has maintained strong links with Vietnam and has translated many poets' work into Vietnamese. Very recently he edited a collection of three poets in the Vagabond Press Asia Pacific Poetry Series - it was launched just three weeks ago in Sydney.

In 2012 Vagabond Press published Hoàng's chapbook Years, Elegy in the Rare Object series. A few years ago, in 2014, half a dozen of the poems included in Captive and Temporal were published in the Contemporary Asian Australian Poets anthology that was co-edited by Adam Aitken, Kim Boey and Michelle Cahill.

Hoàng's poetry is filled with imagery that is also sometimes 'surreal' or seems to have been dreamed. And dreamed in different languages. Vagabond Press publisher Michael Brennan says : 'Nguyen's poems evolve from fragments of speech through images into a landscape that 'chooses' the language suited to its particular tensions and experience. ... '
Hoàng explains : 'The landscape I am 'in' often determines the choice of language. It could very well be a combination of landscape viewed and landscape conjured up from mental storage and/or imagined out on the mind-frame. The tensions caused by these mental images move the words along, a momentum maintained by a kind of reflective music created by this very movement'.

Many of the poems in Captive and Temporal are located in the world's seventh most liveable city Melbourne. The book opens with the poem 'November, end of a street, Melbourne' -
"Islands of forming clouds and minuscule breaking eddies, washed in first lights,/an avenue of trees, full and abundant /a jaywalker among volumes and cubes"

Soon though, the poems moods and style change with a cryptic list poem critiquing authority, in fact 'the highest authority in the region' - an abstracted judicial force that finds its accused guilty. So the book's tenor is set by these variant approaches.

Hoàng presents a synthesis of almost private imagery throughout the collection (though some of the poems are straightforward). One of his methods is to mix and describe impressionistically and then halt the process, to actually cut a line and leave it. Melbourne poet and reviewer Gig Ryan remarked about Hoàng's poetry that 'many poems are almost riddles of communication and withdrawal, where the tension between reflection and living experiences can never be resolved.'

There are instances of meta-poetry where he lets us in on how he thinks about writing. One example is a strange very dramatic poem called 'Autumn Writing' that begins with a fairly usual question "Can one simply write about a fire/to warm up a morning,..." then progresses to an unexpected image of a big head -
"Simple, concrete, a head/of a person, an animal/ moving in the neck-high grass./Another head takes aim. Eyes strained, focussed, breathing slowly... slowly./ Now, the heart of a cross (+) /A sound, terse, metallic."

So is this war - are these people skulking around in the long grass stalking each other? Or is a hunter stalking a beast?

It continues - and this is the processual revelation -

"The poem is thought lying outside of the head, by a distance. Like the degree of damage to the skull, the protected blood and the soft cells and membranes these pathological facts one put down as having never been part of autumnal lyrics."

Some poems here like one called 'Memory Flash' do depict war directly.

Sometimes a skink shifting, sometimes a damask dalliance, a muted rasping of thunder, aglow flare-up flashes behind blanket-of-clouds (Apollinaire may have mistaken for his amour)."

French poets appear in his work - Guillaume Apollinaire, Paul Valery, Charles Baudelaire and, in the surreal moments, there are echoes of Andre Breton. As you know, Vietnam was colonised by the French and known as Indochina from 1887 up until 1954 when the Vietnamese defeated the French and reclaimed their independence. Traces of that period would seem to have an influence. Hoàng has also translated a range of French poetry.

Some poems here revisit, both literally and in memory, Hanoi, old friends, colleagues, Hoang's mother, remembering going to the cinema as a youngster in winter in Danang to watch comedies, westerns, and a chilling documentary on Auschwitz.

Towards the end of the collection the poem 'By accident' analyses Michael Cimino's film 'Heaven's Gate' that Hoàng says could be renamed Biggest Flop but he goes on to canvass US colonisation and the effects of the development of capitalism's land barons on migrants and workers. He signals 19th century diplomat and political scientist Alexis de Tocqueville's book on American democracy and ends the poem in an extrapolation with a resolution - "I write this in the café next to the Baillieu Library, thinking of a nearby family collection/ of Australian arts, and that this country’s arts scene/ has been nowhere near Wyoming, or Naples/in terms of violence or conflicts, then I quickly realize:/ No, that was a facile statement./I should better make an effort to learn/one tongue native, yet to die out of neglect/in this land, yes, a language, being spoken against historical odds."

Hoàng's poems move all over the world from Istanbul to Cholon to Paris to Moscow to Vietnam, Canberra, South Sydney and back again to St Kilda Road in Melbourne and to one of that city's universities with 'A dedication poem to my alma mater, Monash' -

"My alma mater, I remember you when I failed, the word ‘Failed’ I started tasting with you/Any subjects which demand the use of a sliding ruler, or the early rudimentary calculator./Because the upside of such miserable shock was: Kant, Wittgenstein, Mill and Marx, /Peter Singer and Dr C. L. Ten. /Predicated on love alone, besides thoughts, pure thoughts, one is allowed/Nightwalks, miles, from Clayton Train Station back to halls of residence, in bursts, of sheer joys."

After saying that he'll return in old age to read books under a campus gum tree the final lines in this dedication are reflective - "One is allowed to be wrong and quaint, queer. All the sages have gone East /(behind Hills)/All the philosophers I once knew under your roof have gone Emeritus."

The Italian media theorist Franco 'Bifo' Berardi says "Poetry is the reopening of the indefinite, the ironic act of exceeding the established meaning of words" and in this altogether eclectic and complex selection of work I think that's what Hoàng is doing. The distinctive, inventive language of Captive and Temporal will keep you occupied for hours on end.
Congratulations Nguyễn Tiên Hoàng.