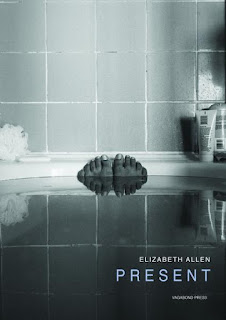 Elizabeth Allen is well known to the Sydney literati for her recent work as the events manager at Gleebooks bookshop but I remember Liz co-organising, with Greg McLaren, lunchtime poetry readings when she was a student here at University of Sydney in the 1990s. She also has a long association with Vagabond Press - generously taking on tasks like storing many boxes of newly published books in her home, doing mail-outs and organising & hosting book launches for the press. In 2016 she edited the New South Wales poetry selection for ABR's online states of poetry project. And also last year Liz spent time on a writing residency in Finland. Present is her second book of poetry.

The book opens with a poem called 'Emergency' - but it seems that the accident never happened, although a scar, real or imaginary, was always a possibility. It's a dramatic opening but its affective opacity is made lighter by the contrasting second poem that's a portrait of an inner-city greenie who displays every worthy trait or alternative-culture cliché in her clothing, habits and actions - a tote bag diplaying an owl, a keep cup, Saltwater sandals, a Monsterthreads jumper, organic produce from the market and so on. It's funny in a stand-up way but unlike most stand-up comedy it's not mocking, it's an empathetic poem.

Liz uses humour to undercut or avoid the maudlin tinges that could muddy the tone in confessional poems. These poems are often confessional but they're also often classically comedic. Meaning that they use a mood swing method of starting brightly, gradually chipping away acerbically at any build up of happiness and then collapsing into some kind of hilarious failure. 'Exit Stage Right' is just this particular type of poem, a monologue, yet addressed to a friend, and in the poem Liz writes "My drama teacher at school used to tell us that you should never turn your back to the audience." There is an audience. It is us. And Liz faces up every time.

A long poem about absence, longing, disconnection from someone very close reminds me of, well, shades of, Roland Barthes' 'A Lover's Discourse'. But there's a wry detachment in Liz's poem that eschews yearning and in the end it's an acceptance of unpredictable absences as its subject's modus operandi.

And I guess a segue from that almost-Barthesian poem to the following section with poems under the title 'FORMALLY INTRODUCE (SOMEONE) TO SOMEONE ELSE' where internet dating, disappointing sex, memories and encounters with lovers brings us right back into a pragmatic rather than philosophical realm.These poems are full of wit and gentle comment.

One of the book's blurbs mentions a 'Derwent pencil moment'. It is a beautiful poem called 'Golden Delicious' and, in it, applying coloured polish to toenails triggers time travel to childhood -

"your eight-year-old friend’s coveted tin/ of seventy-two Derwent colour pencils laid out in a wooden rainbow. Your hand would hover as you made your selection—anticipation that you might find the right shade to match the emotion you held inside; might access a moment of sweet /accuracy."

'Hello Lizzie' is another poem that evokes childhood with a list of youthful fantasies in a secret world borrowed from 'Hello Kitty' bumper stickers.

As well as plenty of verve, there's a variety of styles and content in this collection. Beside the poems there are micro-fictions - one a fantasy of meeting a stranger-lover in a bar, a romantic encounter that goes wrong. There's much regard for the everyday - like mansplaining in Bunnings warehouse that must be endured, though only briefly. And there's much more - a valentine poem, a questionnaire of psychological vulnerability, lost love, missed & mixed messages, translation failures, desire, sex and advice on what to eat, how to cook, poems about and for family, old school friends, contemporary friends and workmates. There is everyday anxiety and lack of confidence - "people will discover how stupid you are/how fundamentally/different/how you are/silently/fucking/things up" - although the entire collection disproves that paranoia simply in its very present existence.

Most of these poems open out to us and sometimes they're quite vulnerable.

The final poem, 'Inpatient (Impatient)' is a long one - a prose poem divided into segments that documents time spent in psychiatric care where, Liz reports, 'We are not patients, we are 'clients'.' In this shelter Liz invokes protection from Frida Kahlo and we are given the key to her choice of cover image -

" I put a photo of Frida on my dressing table so that she can watch over me. At home when I am in the bath I often look at my feet down the end of the tub and think of her feet in her painting, What I Saw in the Water. It isn’t a visual illusion, I just imagine it."

Although the poem notates the process and details of hospitalisation it never overwhelms, partly because of the seamless writing, and partly because of Liz's always intelligent discernment. It ends, beautifully and optimistically -

"I have seen quite a few of the minds of my generation destroyed by madness, starving and hysterical. I am not sure if they were the best minds, it is hard to tell when you are in the midst of it, and they were all wearing clothing for the most part.

I let it all wash over me. I write myself one big fat reality cheque and hope it will be enough to live off for the rest of my life."

And in the spirit of that 'big fat reality cheque' I'm very happy to commend Elizabeth Allen's new collection Present to you.