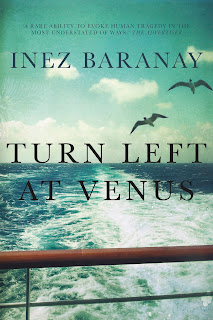 I’ll start with a poet’s disclaimer -
I mostly read non fiction and I should say I’ve often not finished reading some contemporary Australian novels so I have no proper knowledge of where a novel as unconventional as Turn Left at Venus might take its place in the genre. Perhaps I’m not really the most appropriate person to talk about the work, but I am pleased to be here to celebrate the book’s publication and to salute Inez Baranay’s unwavering commitment to writing over many years.

You should definitely know that this book is eccentric and that the tone is conversational. It totally disrupts narrative and proceeds via segments. We meet the main character – a very old Ada lying prone in a care home. She’s tended by two nurses, one of whom realises that the patient Ada is actually A.L. Ligeti, a science fantasy author.
Linked with Ada’s condition in the first segment there’s a swift segue to a new section that’s a mini treatise on the ageing body’s symptoms and indignities. Then the next section is what we discover is an extract from A.L. Ligeti’s science fantasy of a space traveller’s expedition to somewhere in the galaxy named Otzey - a planet where elderly women celebrate with a glittering festival leading to a final ceremony called ‘The Going Out’ – meaning death.

Next, and, again, quite swiftly, the reader is on a ship that was introduced in the book’s prelude. This is the ship carrying, among the passengers, two little eight year old girls from different backgrounds, Ada & Leyla, heading for Australia – quote - ‘a country where it is always summer, always sunny, where they would go to school and speak English all the time.’ Leyla declares that she & Ada will always know everything about each other. They’re European migrants and will live at first in a hostel and then in separate houses in the outer suburbs of Sydney.

As teenagers, Ada and Leyla dream of becoming respectively, a writer and a dancer. Ada will become the science fantasy writer and she’ll travel to many parts of the world.

Soon it’s back to the care home where one of the nurses relates their discovery of Ada’s identity as A.L. Ligeti by reading an online pdf of the story that we, the readers, have just read - about the planet Otzey.

The book zig zags through a kind of continual enquiry - from examinations of how to die, what death might be, and building a life towards it. Many of the sections are only two or three or four pages long. Some passages are longer. It’s a fragmented narrative and it’s metatextual – the actual writing process is often dissected.

In Europe somewhere Ada’s deceased father had been jailed for his anarchist activities – so there is a short introduction to anarchism which leads briskly into an explanation of the origin and uses of the title for Ada’s-as-A.L. Ligeti’s novel Turn Left at Venus. The phrase has various euphemistic uses. For instance, I’ll quote a few of them - it can indicate ‘where not to tell the joke about how you know where the anarchist in the room is...’ or function as ‘actual directions on another planet on which the story takes place’ (but A L Ligeti insists that you do not arrive at one of the planets, Lueshira, by following directions in three dimensional space). It can also mean ‘leave your usual way of seeing things behind’ or ‘you are not making any sense’.

As young women Ada & Leyla go dancing together at a multicultural night club, the Club of All Nations, where they meet a camp society dress designer called Charles who befriends them and begins to make interesting clothes for them to wear. This is their entry to the world of bars and drag that once was Kings Cross, Sydney.

The book circles unceasingly through time and place. It moves from mountain villages in Bali, to Randwick race course, to galactic planets in outer space where gender is mutable just like Kings Cross where Ada meets Ray. They marry for a short time and in that time Ada spends the nights writing her book Turn Left at Venus which she posts off to a publisher in San Francisco. It gets into print and is noticed briefly before it simply vanishes.

Ada is a dreamer – she walks around the streets of Kings Cross fantasising - quote – ‘She did not ever want to describe what she barely saw around her, the dun-coloured world, she only wanted to describe the conjurings of her mind’ - which is a clue to the entire novel and to the imaginary other worlds like Lueshira, a gender-fluid utopian planet where there is no evil and where the idea of underestimating a woman cannot exist.

So - Kings Cross figures prominently – Leyla returns here after seven years of living in Los Angeles. She and Arda become happily reacquainted. Then Ada is inspired to move to San Francisco and, once there, she declares ‘People come to San Francisco to be free’. Here she learns, via a vibrant literary agent called Sophie Stein, that the publisher of Turn Left at Venus had become defunct which explains that novel’s sudden disappearance. Following Sophie Stein’s suggestion, Ada decides to write a sequel.

Ada encounters many kinds of people - an anthropologist, a neighbour who’s a cadet reporter, Roger and Gail, the witnesses at Ada’s wedding, an influential maker of very dark movies known only as SK who suggests that her sequel novel could be called Turn Right at Mars. Ada also meets Julius, an artist, a painter seeking fame. They engage in an affair of “extreme heterosexuality”, for a time, until Ada stops going to see him and starts to plot her sequel. She also has a close friend and confidant, Noemi, who writes about architecture, has an answer for every proposition put to her, and will become Ada’s lover.

Meanwhile, her lifelong friend Leyla turns up in San Francisco. As they make their reconnection and remember times past Leyla encourages her to write the sequel. So Ada’s, or A.L. Ligeti’s book The Shelf of Bone is finished and will be published.

Having experienced a brief lesbian sexual encounter at a women-only party in San Francisco Ada next time-travels to Denpasar, Bali and on to Rome, Italy where through a whirlwind of reminiscence Leyla makes a final appearance. Portals open onto memories and to further discussion of gender, feminism, the body, the purpose of writing, the concept of utopia, relationships with life-like robots, and dying.

Poignantly, Ada and her close friend Noemi make love and form a close relationship. I won’t reveal their dénoument except to say that this is where the story concludes - but not before it turns full circle as Inez gives the fictional future to the younger people we met at the beginning, the two nurses who work at the care home.

Turn Left at Venus is labyrinthine and often quite puzzling and at times confronting as it keeps the reader alert and wondering ‘where will it lead?’ It’s a sprawling spontaneous tale that embraces the long, imagined and real, unplanned life of a fiction writer and the enduring connection between two women and their life long friendship across many changes in many years and in many places on earth and elsewhere...